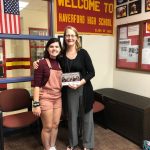 “There is more to justice than RBG” by Georgia Evans

Kelly Eckel’s slogan in her campaign for Court of Common Pleas is “Experienced. Impartial. Independent.” Before interviewing Eckel, I’d never thought much about how important it is that a judge be impartial. As a high school student who identifies as a Democrat, the most I’ve thought about any one judge is waking up in the morning and praying Ruth Bader Ginsburg didn’t die and leave an open seat on the Supreme Court.

I still do that of course, but Eckel’s slogan made me think about what I would expect of a judge presiding on the Court of Common Pleas. Going into my interview, I didn’t even know what the Court of Common Pleas was. Eckel told me “it’s the entry level court in the state court system that hears any type of civil and criminal dispute from point of filing to resolution.” That really made me think about how important these state level courts are since they follow all sorts of cases all the way through the process. And that lead me back to her slogan, and why experience, impartiality, and independence make Eckel a strong candidate.

Eckel’s experience includes living all over the country, in a diversity of communities, because her father was in the military.  Drawing on that background, she sees Delaware County as “a microcosm of the diversity of our nation.”  She has worked as a lawyer for 22 years, following her undergraduate years at Harvard University, law school at Temple University, and clerking for a federal judge.  Since 2010, she has served as an arbitrator for the American Arbitration Association, where she serves as a judge in disputes between parties who sought arbitration instead of court proceedings. “I love that aspect of my practice,” she explained, and that experience convinced her that serving on the Court of Common Pleas would be a perfect way for her to give back to her community.

Her explanation of the “Impartial” and “Independent” parts of her campaign slogan was most interesting to me. “This position is supposed to be apolitical and independent of politics,” Eckel said. “I’m a registered Democrat, I believe in certain things because I’m a Democrat.  But I don’t let the way I feel about certain social issues affect how I rule on things.  I need to follow the law.”  Impartiality is important because “all sorts of different people come before the court and I need to be willing to listen to them. The most important thing a judge should do is listen. A judge should listen far more than she speaks… you need to be open minded.”

The issues that make me want to vote are gender equality, LGBTQ+ rights, and racism. So I asked Eckel if she, as a judge, would have any impact on these matters. I wasn’t sure because she is not running for a seat that makes policy. But she said, “I think so, indirectly.  Going back to that independence and open mindedness a judge should have — as an officer of the court I want to make sure that people who come to my court feel they are being  treated fairly no matter what they look like, no matter what their background is.  They should feel welcome and heard. You want the person on the bench to listen to them, not to prejudge them.”

I asked Eckel about one of the biggest problems I think we’re facing as Democrats right now: the difficulty in getting people out to vote, especially in non-presidential elections. It is hard to show people that these elections are just as important even though they are not as publicized. To that Eckel said, “For everyday citizens in Delaware County, sure it matters who’s the president and who’s your congressional representative.  But your personal life is much more likely to be touched directly by the county judicial system than by the president.”

As someone who is seventeen, cannot yet vote, and is so passionate about politics, I wish more people could see Eckel’s point of view. I’ve stood at the polls in off-year elections, passing out sample ballots to the few and far between who show up. It’s aggravating, to say the least, to see so few voters in those years.  I know turnout was a lot better in 2018.  I’m just hoping Democrats continue that trend in 2019 and vote for great candidates like Kelly Eckel.