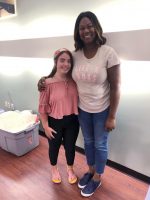 Nusrat Rashid’s campaign is unique in ways that deserve notice.  If she is elected to serve on Delco’s Court of Common Pleas, she will be the first African American woman on that bench. This would be monumental for Delaware County, signaling a whole new era of opportunities for women of color in our community.

I expected that my first time interviewing anyone, let alone a lawyer, would be intimidating and nerve-racking, but Rashid made me feel right at home and told me I was free to ask her anything that I wanted.  So, right off the bat, I said that I am a 16-year-old high school student who has never heard of the Court of Common Pleas. I even admitted that I barely understand the elementary outline of the American judicial system that had been taught to me in history classes.  We then talked about her campaign for a judicial seat on the Court of Common Pleas, and I learned that it is the trial court that deals with all kinds of cases, including criminal, civil, family, and juvenile cases.

I learned a lot in this interview about official aspects of this trial court, but my main focus was on finding out why Rashid is running for this position. Why — after owning her own law firm in Chester, PA. and specializing in criminal defense and family law after working as a personal injury attorney — was she now aspiring to be a judge on the Court of Common Pleas? Rashid explained, “I am running because I’ve represented individuals and families during all different types of crisis situations… people have a lot of problems and they’re looking for solutions. And when people are looking for those solutions, you want to have a court that reflects the diversity and the differences, as well as the things that bind us all in common across our county.” Rashid’s main message is that she wants to focus on bringing justice, equity, and empathy to the court, while always respecting the law.

Rashid and I also talked about how her personal life as a mother and as a woman of color has impacted her career. For example, she switched from personal injury cases to criminal and family cases because “it’s a more personal type of law… as a mother, I fight harder as an attorney in these kinds of cases. But, at the end of the day, the law rules.” As for being a black woman in a predominantly white community, she says, “unfortunately, black people are disproportionately over-represented in the U.S. criminal justice system, and the same is true here in Delaware County… but just because I’m black doesn’t mean I will be unfair. I’ll be very fair to everyone, whether they are black or not, but I will understand some of the special challenges and, within the law, I should be able to reach a balance and make fair decisions for everyone involved, regardless of race.” Rashid’s empathy for the tough situations that many people face stems from her background as a mother and black woman. Her intelligence and respect for the law have resulted in great professional success so far and should result in political success in November.

Before I left, I wanted to ask Judge Rashid something that had been on my mind: which prominent leaders inspired her to become the strong woman she is today? She listed off the amazing Ruth Bader Ginsburg, Thurgood Marshall, Shirley Chisholm, and Michelle Obama, all of whom she admires for their persistence, fairness, and grace as they made their mark on the world and created a path for so many under-represented people to create a better environment for us all today.

I liked Ms. Nusrat Rashid the moment she walked through the door wearing a tee-shirt labeled “like a boss.” And that is a perfect way to describe Rashid: a boss.